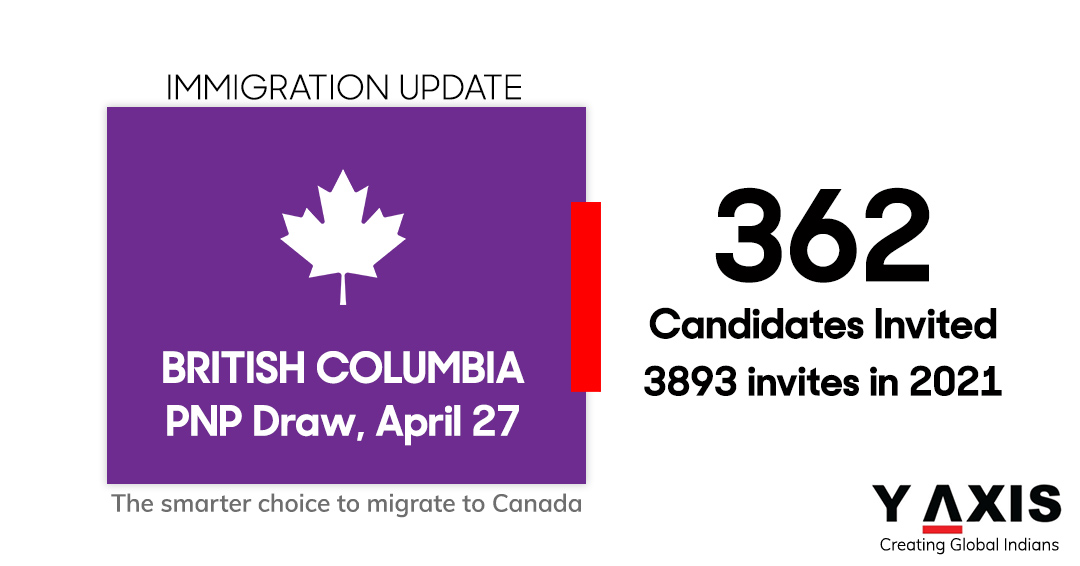 This is the fourth provincial draw by British Columbia in April 2021. The previous draws in the month were held on – April 20, April 13, and April 6.

Those invited by British Columbia PNP can now proceed to applying to the BC PNP for a provincial nomination for Canadian permanent residence.

The invitations to apply issued by the BC PNP went out to candidates under the categories of Skills Immigration [SI] and Express Entry BC [EEBC].

The BC Provincial Nominee Program offers 3 categories – Skills Immigration, Express Entry BC, and Entrepreneur Immigration – to become a Canadian permanent resident settled within the province.

Each of the categories has separate immigration pathways or ‘streams’ that can be applied under, based on the candidate’s NOC skill level, job, or international student status.

With points-based invitation system, SI and EEBC is targeted at skilled workers that wish to immigrate to Canada and settle within BC.

The SI is for skilled and semi-skilled workers in high demand occupations in BC.

Linked with the federal Express Entry system, the Express Entry BC is “a faster way for eligible skilled workers to immigrate to BC”.

An Express Entry candidate that is a provincial nominee – under any of the PNP streams linked with the IRCC Express Entry – is allotted 600 CRS points, thereby boosting their ranking in the Express Entry pool.

Those not qualifying for any of the BC PNP streams might explore the other ways available for coming to BC.

The total number of BC PNP nominations available in a year depend on the annual allocation by the federal government of Canada.

In 2020, a total of 9,310 British Columbia PNP invitations were issued through the BC PNP categories of SI and EEBC.

With the latest round of invitations, British Columbia PNP has issued a total of 3,893 invitations  so far in 2021.