The growth of Immigrant Population in the US 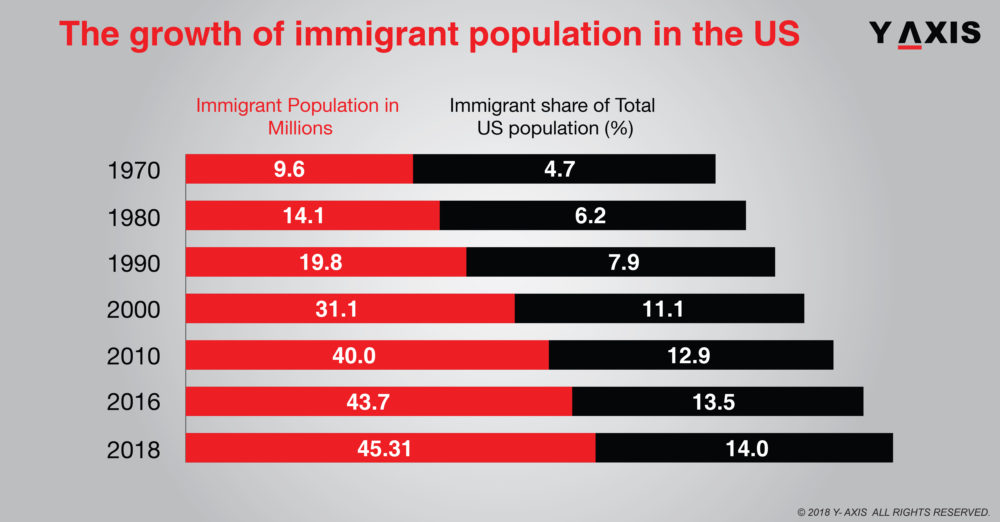 The latest projections by the Pew Research Center have revealed that the immigrant population in the US will make up 18% of the total population in the nation by 2065. This is in comparison with the 14% share currently in 2018.

Immigrants along with their kids will represent 36% of the total US population in 2065. This is equal to or surpassing the peak levels witnessed around the turn of the Twentieth century. It will also represent a twice increase since 1965 with 18% and a considerable hike from the current 26%.

The arrival of fresh immigrants and the births of their offspring and their progeny account for 55% of the population increase in the US. This is with 324 million in 2018 from 193 million in 1965.

The fresh projections by the Pew Research Center also demonstrate that the US is estimated to grow to 441 million in 2065. Also, 88% of the increase is associated with potential immigrants and their progeny, as quoted by the Pew Hispanic.

The immigrant population has had only a moderate impact on the age structure of the US. However, the influence on ethnic and racial composition has been striking.

In the absence of immigration after 1965, the median age in the US currently would have been 41 in place of 38. There would be 75% whites in place of 62%. The population of Hispanics would be 8% instead of 18%. Asians would constitute less than 1% of US residents in place of 6%.

Y-Axis offers a wide range of Visa and Immigration products as well as services for aspiring overseas students including Work Visa for USA, Study Visa for USA, and Business Visa for USA.

If you are looking to Study, Work, Visit, Invest or Migrate to the US, talk to Y-Axis, the World’s No.1 Immigration & Visa Consultant.

Documents an Immigrant will need to work in the USA