British Columbia Invites 243 to Apply for BC PNP Nomination 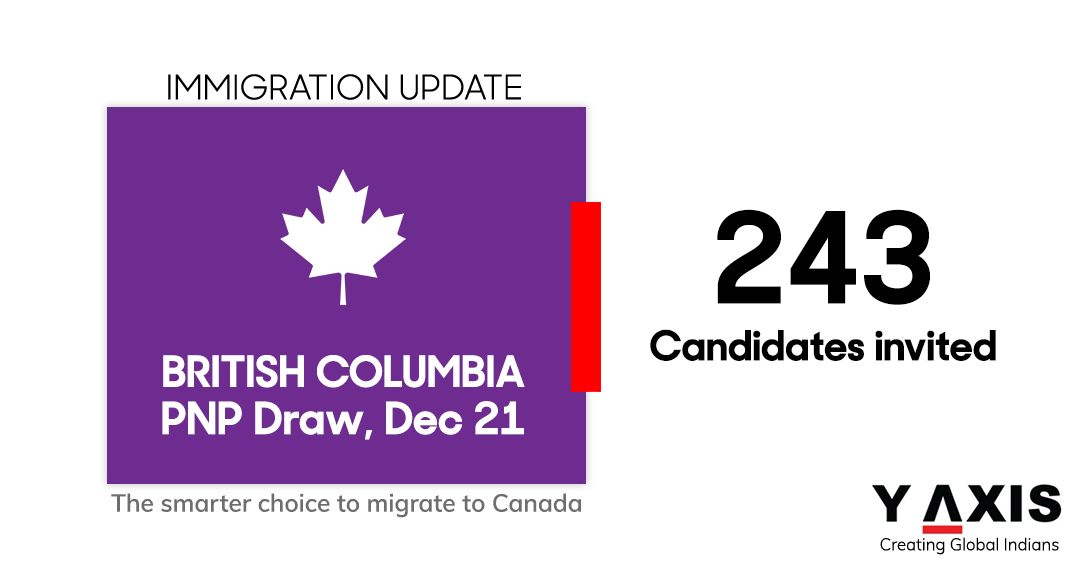 Canada’s British Columbia province has held another round of invitations under the route to Canadian permanent residence that goes through the provincial and territorial governments.

To be considered by the BC PNP for a nomination under Skills Immigration, the individual must have previously expressed an interest in living in British Columbia as a permanent resident. However, certain streams don’t require the creation of an Expression of Interest (EOI) profile with BCPNP Online.

The previous provincial draw by British Columbia was held on December 14, 2021.

What is the Skills Immigration Registration System (SIRS) of British Columbia PNP?

A limited number of nomination spaces are allotted in a year to the provinces and territories part of the PNP. Comparatively, a larger number of applications are received as against the nomination certificates that can be issued in a year.

SIRS allows British Columbia PNP to prioritize candidates with a higher likelihood of successfully settling in and economically establishing themselves within the province.

So, how do you get your SIRS score? Let’s find out.

Following successful registration with the BC PNP Online, a SIRS score will be allotted based on the factors of –

Which BC PNP streams require invitations?

There are three separate pathways – Skills Immigration (SI), Express Entry BC (EEBC), and Entrepreneur Immigration (EI) – that lead to permanent residence in British Columbia. Other immigration pathways are also available.

If you are interested in any of the following four BC PNP pathways, you can directly apply through BC PNP Online. There is no need to register under the BC PNP’s SIRS.

How can a BC PNP nomination get me my Canada PR visa?

STEP 1: Registration with the BC PNP.

STEP 3: Application submission for a BC PNP nomination.

A job offer in BC – of indeterminate, full-time employment – will be required. The BC employer must be willing to support you throughout the BC PNP process,

As per the BC PNP, “The only exception to the job offer requirement is if you have a graduate degree from a BC university in the natural, applied or health sciences.”

Which are the Top 5 source countries for the SI stream of British Columbia PNP?

With the latest round of invitation, British Columbia has issued a total of 11,603 invitations to apply so far in 2021.