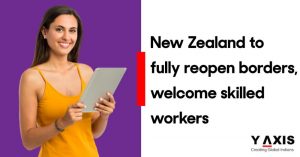 Borders opened for some countries

The step will also help in reducing the labor shortages that resulted due to COVID-19. More than 3 million people used to visit New Zeeland before the occurrence of pandemic. This tourism brought income of 20 percent.

Are you looking to Migrate Overseas? Talk to Y-Axis, the world’s no. 1 overseas immigration consultant.