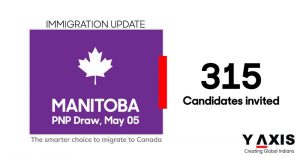 In the EOI #145 draw on May 05, 2022, Manitoba invited 315 immigration candidates for a provincial nomination. These candidates can apply through the Manitoba Provincial Nominee Program (MPNP). This will, in turn, support their final application for Canadian permanent residence.

Out of 315 Letters of Advice to Apply, 48 were issued to candidates who have a valid Express Entry ID and job seeker validation code.

Results of the latest draw

*Check your eligibility to Canada, through Canada Immigration Points Calculator.

What is Manitoba Immigration Programs?

If the candidate wants to avail the nomination through Manitoba, then they need to register an Expression of Interest with the Manitoba Provincial Nominee Program. This allows receiving an LAA through either of the streams Skilled Workers in Manitoba and Skilled Workers Overseas.

Manitoba ranks the candidates out of 1,000 points based on their human capital factors and association with the province.

The candidate need not be in Manitoba during the time of application.

If you are looking to Migrate to Canada talk to Y-Axis, the World’s No.1 Immigration & Visa Company.