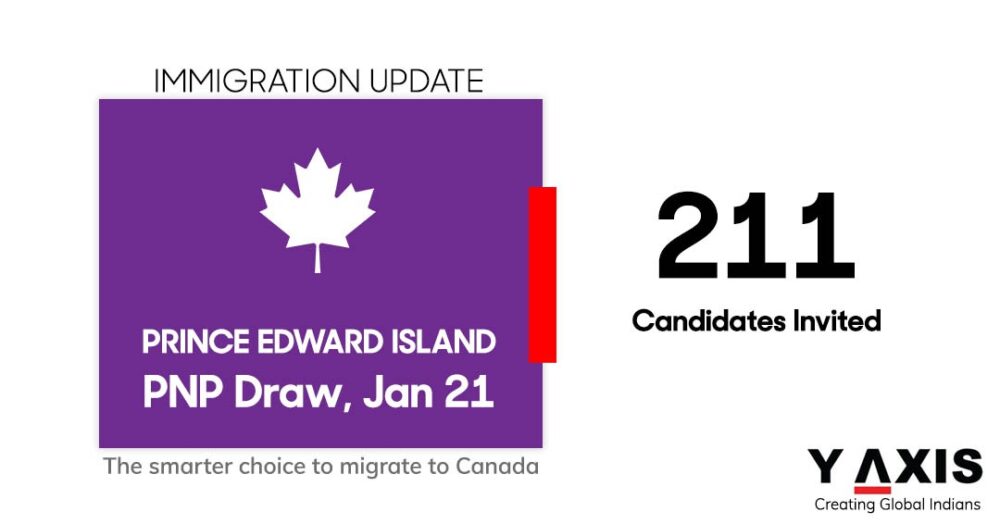 Prince Edward Island [PEI] in Canada has held its first scheduled provincial draw of 2021. In the latest draw by the PEI Provincial Nominee Program [PEI PNP], a total of 211 Canada immigration candidates have received invitations to apply for a provincial nomination.

Candidates successful in securing a provincial nomination through any of the provincial or territorial governments that are a part of Canada’s Provincial Nominee Program [PNP] can then make use of their Nomination Certificate for applying to the federal government for their Canadian permanent residence.

Recently, the PEI PNP had published their anticipated Expression of Interest draw schedule for 2021.

Note. – The minimum score required for a Business Impact candidate to have received an invitation was 80.

Generally, the specific number of candidates invited as well as the minimum EOI score required under the categories of Labour Impact and Express Entry individually is not disclosed.

PEI is known as a Canadian province that “offers rewarding career opportunities and a business community that is supportive of entrepreneurs”.

PEI Express Entry category is linked with the federal Express Entry system. As per the Office of Immigration, “You can apply for a PEI Express Entry nomination for permanent residency through the Prince Edward Island Provincial Nominee Program [PEI PNP].  Your nomination through PEI PNP will increase your chance of being issued an Invitation to Apply from the Federal Government.”

An Express Entry candidate that is a provincial nominee is allotted an additional 600 points towards their CRS score, thereby guaranteeing that they would be issued an invitation to apply [ITA] from Immigration, Refugees and Citizenship Canada [IRCC] in the subsequent federal draw to be held.

To be considered by the province for a provincial nomination, an Express Entry candidate would have to first register their Expression of Interest [EOI] profile with the PEI PNP. There is no change involved for the creation of an EOI profile.

The Labour Impact category of the PEI PNP is for foreign nationals – with a valid job offer as well as support from a PEI employer – that are interested in applying for Canada PR through the PEI PNP.

The Business Impact category, on the other hand, is for foreign nationals looking at pursuing a viable business opportunity in PEI that would like to apply for a PNP nomination for Canadian permanent residence through PEI.