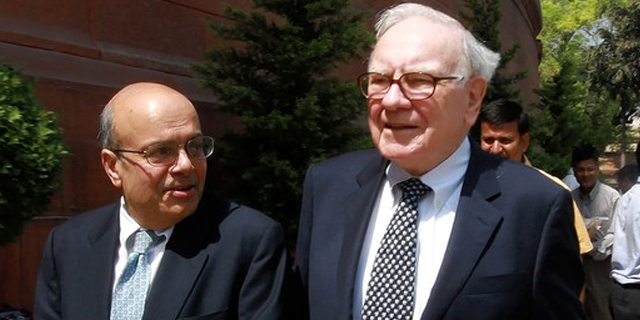 Ajit Jain may well be the next head of Warren Buffett led Berkshire Hathaway.  In a letter to shareholders, Buffett has praised India-born Ajit Jain immensely for the way he has grown the business over the years.

Who is Ajit Jain?

Ajit Jain is a man of Indian decent. He hails from Orissa and had first moved to the US in 1976 to pursue his MBA from Harvard Business School. After earning his degree in 1978, he worked for McKinsey & Co., for a period of 2 years i.e. till 1980 and returned to India. Later, that year, he had an arranged marriage with Tinku Jain and up on her insistence moved back to the US.

It was only in 1985 that Ajit Jain quit his job at McKinsey & Co., and joined Warren Buffett led insurance company. Back then, he knew nothing much about insurance business, but today, he is the President of Berkshire Hathaway insurance group and is also the frontrunner to succeed business magnet Warren Buffett.

“Ajit Jain… is simply the best in this business.”

“It is impossible to overstate how valuable Ajit [Jain] is to Berkshire. Don’t worry about my health; worry about his.”

Though Buffett did not directly name Jain as a successor in his letter, the Vice-Chairman of the company, Charles Munger named two possible candidates for the top role – Ajit Jain and Greg Abel.

The Economic Times quoted Charles Thomas Munger’s letter to the shareholders, in which he said, “but, under this Buffett-soon-leaves assumption, his successors would not be ‘of only moderate ability’. For instance, Ajit Jain and Greg Abel are proven performers who would probably be under-described as ‘world-class’. ‘World- leading’ would be the description I would choose. In some important ways, each is a better business executive than Buffett.”

The Chairman and CEO of the company, Warren Buffet, however have been talking of Ajit Jain lately. Warren Buffett once said, if he, Charles Munger and Ajit Jain are in a sinking boat and the possibility is of saving only one person, rush to save Ajit Jain.

Ajit Jain is yet another important migrant story in the USA. He is one of the most important figures in the American insurance industry and he also heads Berkshire Hathaway India operations. If it were not for migration, the world may not have seen the likes of Ajit Jain.