Work Permits for Spouses of Canadians Waiting For Permanent Residency 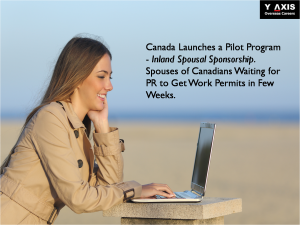 Canada introduced a one-year pilot program to issue work permits to spouses of Canadians already living in Canada and waiting for Canadian permanent residency. It’s a one-year program to encourage contribution to their families and also to the Canadian economy.

“As we promised, Citizenship and Immigration Canada is launching a pilot program that will allow spouses being sponsored under the Inland Spousal Sponsorship program to receive their work permits much sooner while we process their applications,” a spokesman for Immigration Minister Chris Alexander told CBC News on Monday.

Most Canadian spouses waiting for permanent residency cannot take work despite being in the country because of long processing time and procedural delays. However, with Inland Spousal Sponsorship Program in place, individuals can get their work permits within few weeks and find a job with any employer in Canada. Whereas, new sponsorships have to wait for at least 4 four months before receiving their work permits.

Applicants can also receive provincial healthcare while awaiting their PR to get approved.