What does Modi plan to get for India in his second visit to the U.S! 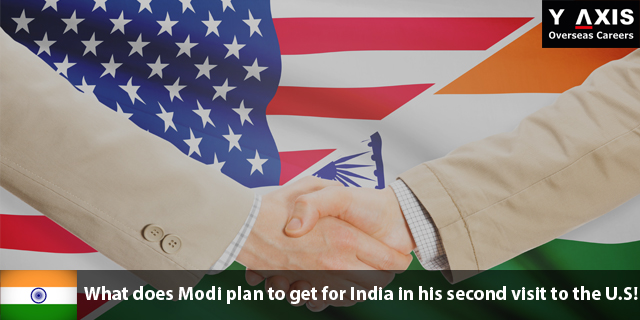 Modi plan to get for India

The second visit of the Indian Prime Minister Mr. Narendra Modi to the United States of America is aimed at improving the country’s investment in our nation. It is also likely to improve the process of job creation in both the countries. When our Prime Minister first visited the United States, the purpose was to strengthen the relationship that exists between the two countries as the largest democracies.

Now, the aspects of focus of the Strategic and Commercial Dialogue is improving the economic bond between the nations. This meeting is a development over the successful talks that took place when President Obama had come to India in the month of January. This time they will focus on the investment issue. The U.S officials would like to see some changes in New Delhi, before they take a decision on investment.

Is India open to investment?

Michael Kugelman from Woodrow Wilson Center is of the opinion that everything takes too long to get implemented in India and that this applies to investment too. He also opine that Prime Minister Modi is trying very hard to change the image of India from one that is not open to investment, to one that welcomes it.  Airtel Chairman Sunil Bharti Mittal has thrown light on other things that will be discussed on this occasion.

He said ‘’The purpose of this is to promote bilateral trade and investment and a number of issues are going to be discussed tomorrow – smart cities, digital infrastructure, manufacturing in India, infrastructure – so a lot of projects have been identified.” These issue when implemented are hoped to bring about mutual benefits to both the countries.  Other than this, India’s geographic position beside Afghanistan and Pakistan will also be discussed in this meeting.

What else is in store?

During this visit to the U.S, Mr Modi will also meet Indian Diaspora in America along with other important personalities like Facebook’s Mark Zuckerberg, Apple’s Tim Cook and Tesla’s Elon Musk, and others, at an event held there. Let us hope that this brings results as expected by both the countries.