Vivek Murthy Could Be The Next US Surgeon General 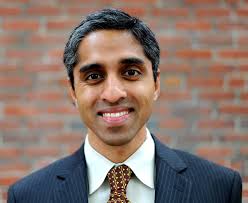 Vivek Murthy Is Likely To Be The Next Surgeon General of US. | Photo Credit: Dr. Vivek Murthy’s Twitter Account

Vivek Murthy, born to Indian parents in Britain and moved to the US at the age of three, is nominated by US President Barack Obama to be the next US Surgeon General. The senate has already voted 52-40 on his nomination for the top post and a formal confirmation is likely to be made on Monday just before the start of holiday season in the US.

If elected, Vivek Murthy would be the youngest Surgeon General in the history of America. The Indian Diaspora is therefore campaigning nationwide to gather support from their senators.

What Makes Vivek Murthy the Top Contender for the Post?

Vivek Murthy has been Barack Obama’s top choice for more reasons than one:

Dr. Murthy is the top choice for the position of US Surgeon General, not just for President Obama but also for scores of hospitals and healthcare organizations including American College of Physicians, American Public Health Association, and many others across the country. So it very much possible to see him succeed Boris Lushniak and take over the position in coming weeks.