Germany’s Oktoberfest to be held again after 2 years 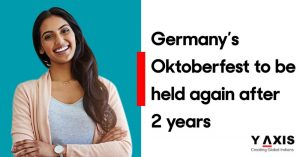 Oktoberfest is one of the world’s largest wine or beer festivals, and it’s one of the largest events in Germany. This Oktoberfest folk festival in Germany happens for 16-18 days from mid-or-late September to the first Sunday of October. This fest is a part of Bavarian culture. During this 16-day festival, 7.7 million liters of beer are consumed. Other cities worldwide also hold Oktoberfest, which is based on Munich Event.

Now Germany is getting ready to rearrange the annual beer festival. Oktoberfest is about to will return to entertain the foreign tourists and local nationals in Munich in October, after two years of a wait due to the pandemic. This year, the festival will be held without any restrictions, so the country expects a huge flow of tourists worldwide.

Dieter Reiter, Munich Mayor Press conference statement
Munich Mayor Dieter Reiter says, ‘Expecting no worse situation by this autumn season so that the Oktoberfest can be organized without restrictions and rules. We were also hoping there would not be any last-minute call-off to cancel the fest’.

Markus Söder, The Minister-President of Bavaria

The Minister-President of Bavaria, Markus Söder, also stated, ‘It’s a good sign that Oktoberfest is returning during these hard times of covid-19 pandemic. The war with Ukraine has also impacted whole European Union countries. Oktoberfest is the right thing to come during this autumn’.

Söder specified that “The beer festival is considered as Bavaria’s international flagship. Though we have a lot of sympathy for Ukraine, there is no plan to cancel the Oktoberfest in support of Ukraine”.

*Want to visit Schengen? Y-Axis is here to assist you

The beer festival that is celebrated yearly is called Oktoberfest, which will be held from September 17 to October 3. On average, 6.5 million international visitors are expected to taste authentic beer and enjoy music with friends.

Statistics for Oktoberfest
On average, 7.7 liters of beer are consumed during the Oktoberfest between these 17 days.

Thus the Oktoberfest generates almost 75.7 million Euros profit on the authentic beer itself.

The festival not just celebrates with beer and breweries but also delivers merchandise, Bavarian food, and the essence of a carnival ride.

During pre-pandemic in the year 2016, a total of 6 million people visited Munich during Oktoberfest. This number also includes 600,000 guests in the first week during the festival only.

In the year 2016 itself, the number of visitors who visited Germany was 1 billion. On an average, 12000 jobs were initiated for the locals during the festival period, which helped the economy grow during the event.

“After reasonable estimates, we have approximately 1 billion euros of economic value for the Oktoberfest. We spend 350 million directly on Oktoberfest grounds and around 250 million spent on shops, retail and rest of the amount are spent on the hotels for overnight stay.”

With the hopes that the COVID cases will not increase, Bavarians are trying to attract visitors. Currently, Germany has 415,153 COVID positive cases with 79 deaths reported per the World Health Organisation (WHO) reports from last week.

If you want to visit Germany as a tourist, the following are the requirements for the European Nations. One needs a short-term visa, which is called a Schengen visa. This is valid for 90 days. The Schengen visa is valid and can be used in all the European Countries as they come under the Schengen agreement. Germany is part of this agreement too. With this visa, one can travel and stay in Germany and 26 other Schengen countries.

Eligibility for applying for a Germany Tourist visa

Note: If you are a citizen from the US, New Zealand, Australia, and the European Union countries, you are not required to obtain a visa to enter Germany until you have planned to stay longer than three months in Germany.

Also Read: 126 million new travel & tourism jobs in next 10 years
Web Story: Oktoberfest to be held in Munich in October 2022