Best places to visit in Australia 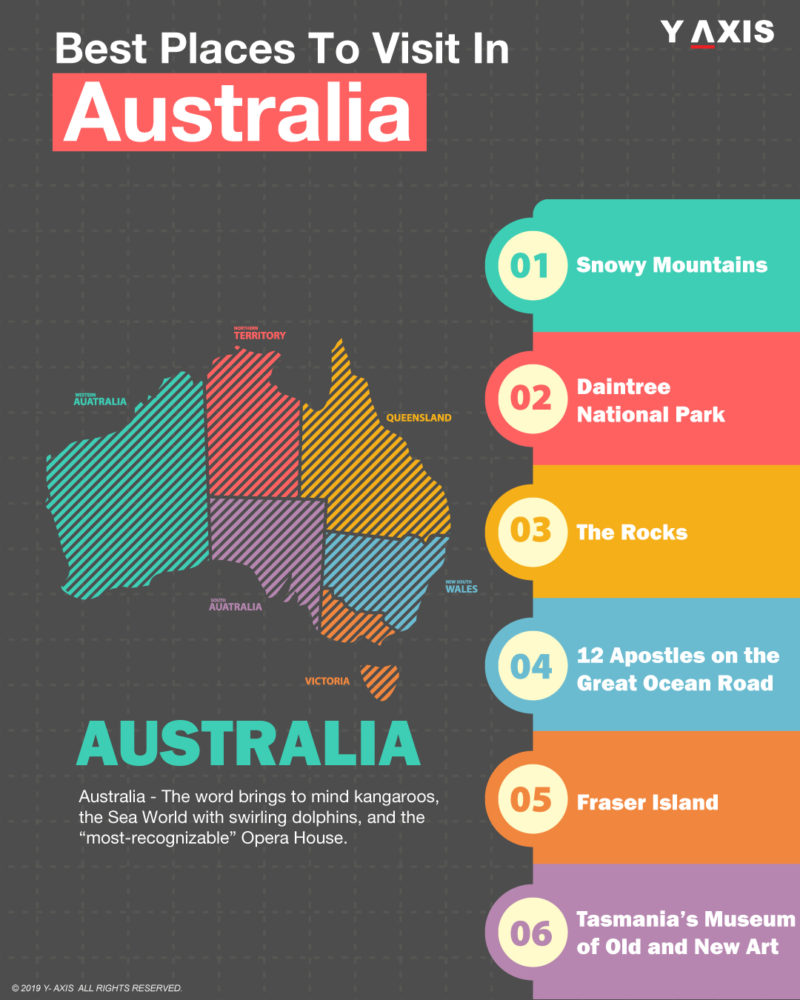 Australia – The word brings to mind kangaroos, the Sea World with swirling dolphins, and the “most-recognizable” Opera House.  There is much more to Australia.

Visit any of the following for an unforgettable experience.

Considered to be the truly alpine wilderness in Australia, there is a lot to do in Snowy Mountains.

While at Snowy Mountains, you can take part in many winter activities – skiing, snowboarding, tobogganing, snowball fights, snow-tubing, chairlift rides, or snow-shoeing. You can also take part in bushwalking or mountain biking.

The Daintree National Park is where “the rainforest meets the reef”. The Great Barrier Reef, that is.

Picturesque and serene, the Daintree National Park is located about 100 kms in the north-west of Cairns, Far North Queensland.

A natural UNESCO World Heritage Site, the Daintree rainforest is well known for its exceptional biodiversity, remote location, as well as the teeming unique species inhabiting the area.

The Rocks are essentially considered to be the birthplace of modern Sydney, with the European settlers choosing to step ashore here in 1788.

Originally a British colony of sailors, convicts, and soldiers, the Rocks is now a favorite haunt for tourists.

Walking is the best way to see The Rocks. There are many museums, markets, and galleries that are ideally explored on foot.

12 Apostles on the Great Ocean Road

The 12 Apostles are limestone pillars. Once connected to the mainland, wind and waves turned them into caves. These caves were then transformed into arches, and later into about 150 feet tall columns.

Over time, some of the pillars have collapsed. As of now, there are 8 of them still standing.

Fraser Island has the unique distinction of being the only place in the world where tall rainforests grow right on sand dunes.

With a mosaic landscape, Fraser Island has a wide variety of natural wonders. Lakes, sandy beaches, rainforests, sheltered mangrove areas, and dune lakes; all can be found in Fraser Island.

Dubbed a “subversive adult Disneyland” by David Walsh (the creator), Tasmania’s unconventional and provocative Museum of Old and New Art (MONA) is situated at Hobart.

Though named Ayers Rock, the rock monolith is best known by the name of Uluru.

An interesting fact to note is that the Uluru can also be found around 2.5 kms underground. Above ground, Uluru is 348 meters.

A majestic fountain, miniature lakes, tree-lined avenues, and beautifully laid flower beds; all can be seen in the Carlton Gardens. It is a popular spot for barbecue parties and picnics.

Completed in 1932, Sydney Harbor Bridge links the residential north with the city center in the south.

Locally known as “the Coathanger”, there are three different ways for exploring the Sydney Harbor Bridge – by climbing the bridge, from The Pylon Lookout, or by the pedestrian walkway.

Following the death of the popular Melbourne artist Mirka Mora, in August 2018, Heide has set up a free exhibition, Mirka for Melbourne that is well worth a visit.

If you are looking to Study, Work, Invest, Migrate or Visit Australia talk to Y-Axis, the World’s No.1 Immigration & Visa Company.

Plans for tougher Australian Citizenship tests to be dumped