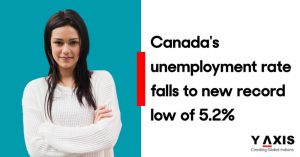 Canada has recorded the lowest unemployment rate of 5.2 percent during April month.

According to the Canada Labor Force survey, statistics have been released stating that there has been a massive increase in the unemployment rate in the last two months.

Among all the provinces in Canada, Quebec had a massive fall in unemployment of 3.9 percent, and it is the lowest of all provinces. This indicates that the French-speaking province has a huge requirement in the labor markets. The employment rate for Canada in April was 61.9 percent.

Are you looking for Canadian PR then get expert guidance from Y-Axis Canada overseas immigration professionals.

For more updates on Canadian immigration and many more, click here…

The Canadian provinces and their unemployment rates

Jobs in Canada by industry

There was a massive requirement for jobs for scientific, professional, and technical services during April. These industries initially had 15,000 jobs, which has increased to 121,000 jobs in the last year. This increased rate is 7.3 percent, becoming the biggest number in overall employment growth.

The public administration sector has also added 17,000 jobs for the second consecutive month, especially Quebec province. Other industries are also seeing an increase in employment in Federal, Territorial, provincial, local, and few Indigenous governments. Also, Courts and protective services are seeing a mild fall in unemployment.

Do you have a dream to migrate to Canada? Talk to Y-Axis Canada overseas migration consultant.