Unemployment rate falls in Canada in the fourth consecutive month 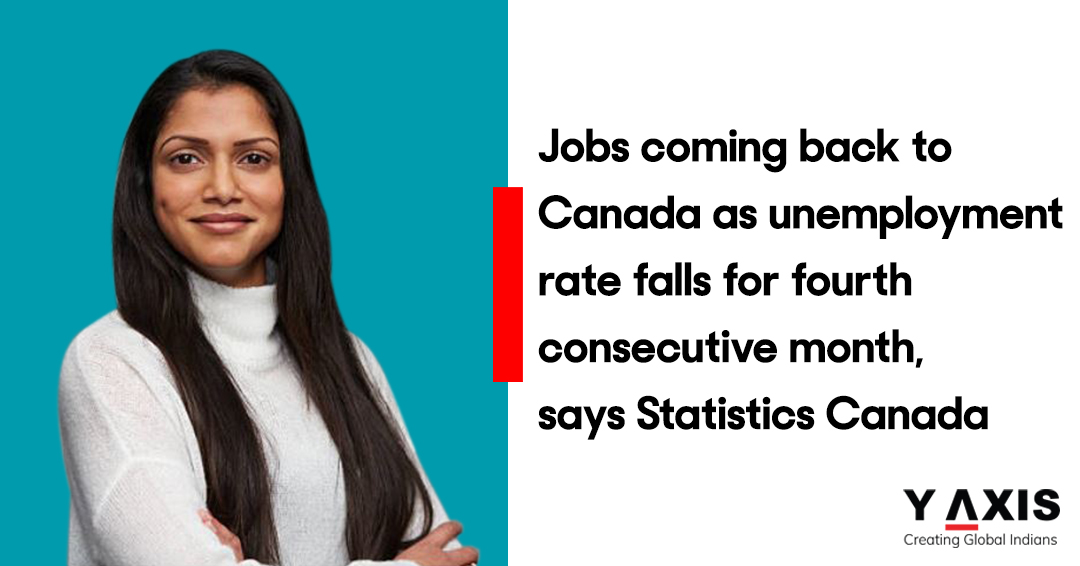 Unemployment is trending downwards in Canada and offers several opportunities for immigrants to resettle through various Economic Class Immigration Pathways.

According to Canada’s Labor Force Survey Statistics reports, the unemployment rate has dropped down even in September, the fourth consecutive month, to 6.9 percent. It is the lowest rate since the advent of the pandemic as all the workers resumed back to the labor force.

Increases in the employment rate were seen in full-time work and among people aged 25 to 54. Jobs resumed back in both the public and private sectors in September 2021.

Ontario, Quebec, Alberta, Manitoba, New Brunswick, and Saskatchewan were the champions among the provinces in Canada.

Whereas the hotels and restaurants continued to suffer due to the lack of workers. The employment rate dropped for the first time in this sector in September during the past five months by 27,000 jobs.

Jobs were added in Manufacturing and Natural Resources Sectors

The manufacturing sector saw gains of about 22,000 jobs, and natural resources added another 6,600. Canada is slowly recovering back from the economic hit of the pandemic due to rising vaccination rates, and hence the immigration continues to play a vital role in the country’s recovery.

As per the latest Canada Population Estimates report, the Canadian population grew by only about 208,900 during that year which is less than half in the previous year. Canada immigration also suffered due to a massive slump due to the amidst of COVID, and the percentage has fallen to 56.8 percent, which accounts for 156,500.

But these immigration levels during that time kept Canada growing.

Immigration is the main cause for the Canadian Population Growth

All the pandemic restrictions were eased now, and immigration contributed to 74.9 percent of Canada’s population growth, Statistics Canada revealed on September 29.

The immigration in Canada is picking up again, indicating that the country’s economy is resuming back slowly to its normal state.

Due to border restrictions during the pandemic, immigration in Canada was affected. Immigration fell from 284,200 in 2020 to roughly 226,200 in 2021. The count of temporary foreign workers also declined by almost 42,900, after steadily increasing in recent years.

Immigration within Canada is fueled up by people moving to areas with lower rates of Covid-19 infection. This helped to grow the populations in provinces like British Columbia, the Yukon, and the Atlantic.

Among these, British Columbia has the largest increase in interprovincial migration compared to other provinces during that year, with a boost of 34,277, its biggest gain in population in 37 years.

All four Atlantic provinces recorded a net interprovincial migratory increase for the first time in 11 years.

Even during the pandemic, there are many ways foreign nationals can come to Canada to seek permanent residence.

Candidates’ profiles will be ranked as per the point-based system known as the Comprehensive Ranking System (CRS). The candidates with the highest-scoring will be considered for an Invitation To Apply (ITA) for permanent residence. These individuals who received an ITA have to submit the application quickly and pay the required fees within 90 days. Canada operates a two-tiered immigration system and offers programs like skilled workers at both federal and provincial levels.

The Provincial Nominee Programs (PNP) allow skilled worker candidates to move to Canada. After receiving the provincial or territorial nomination, the candidates are eligible to apply for Canadian permanent residence through federal immigration authorities.

Investors also can come to Canada under the Start-up Visa program, which can grant them Canadian permanent residence. The program aims to encourage innovative entrepreneurs to invest in Canada and link them with the Canadian private sector businesses, like:

You can check your eligibility instantly for free through Y-Axis Canada Skilled Immigration Points Calculator.

International students can easily get the route to gain permanent residence in Canada under a Study Permit, then applying for a Post-graduation Work Permit, and finally seeking their permanent residents by applying through the Express Entry system.

Canada aims to welcomes 350,000 international students every year. To be eligible to study in Canada these students need to demonstrate that they:

After getting the study permit, these students can work in Canada based on the following categories:

Later after graduation, the foreign students can apply for a work permit under the Post-Graduation Work Permit Program. Under this program, the work permit is issued for the length of the study program, up to a maximum of three years.

This valuable work experience gained while an international grad works in Canada under a Post-Graduation Work Permit is counted while applying for the permanent residence application through Canada Express Entry system.

The valuable work experience gained while an international grad works in Canada under a Post-Graduation Work Permit can count towards a permanent residence application through Canada Express Entry system.

The Comprehensive Ranking System (CRS) used in Express Entry system programs to immigrate are assigned based on the following points:

Super Visa Application for Parents and Grandparents of Canadian PRs