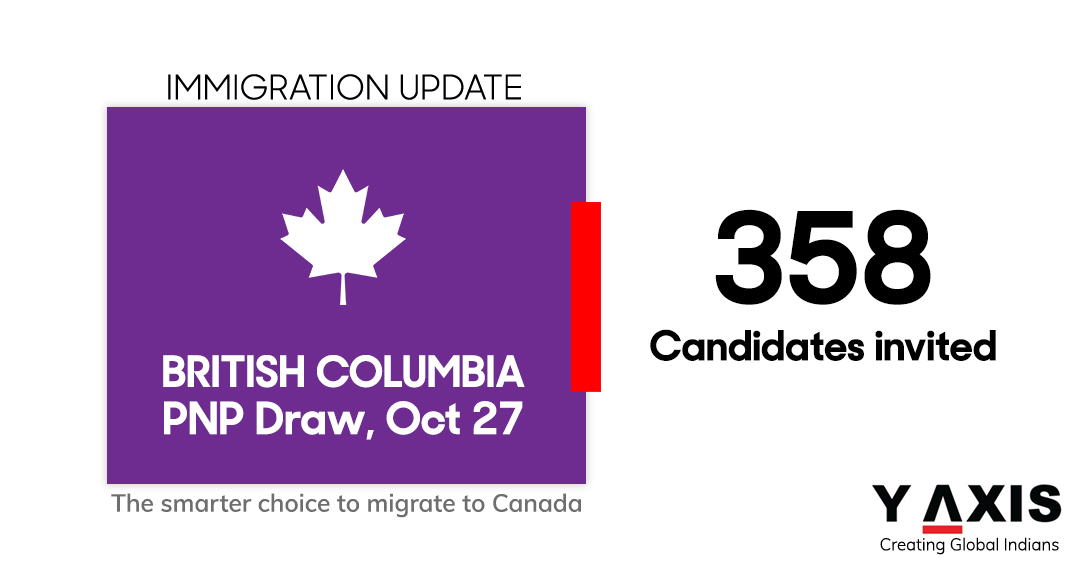 Canada’s British Columbia has held another round of invitations. Those invited can now apply for a nomination by BC for permanent residence in Canada.

On October 26, 2021, British Columbia issued a total of 358 invitations in 2 separate draws held the same day.

British Columbia is a part of the Provincial Nominee Program (PNP), also referred to as Canadian PNP.

The previous round of invitations by British Columbia PNP was held on October 19, 2021.

The first step to be considered by BC PNP for a nomination is that of registering with SIRS.

By registering with SIRS, British Columbia gains access to information, such as – the individual’s education, job, language ability, wage offered, and location in BC.

This information is then reviewed against the labour market requirements of the province.

SIRS registration is needed for the BC PNP categories of –

No SIRS registration is required for International Post-Graduate and HealthCare Professional categories of British Columbia PNP. Such applicants can apply directly to the BC PNP.

Applicants for all the other BC immigration categories must first register through BC PNP Online.

The minimum category and program requirements must be met by the applicant.

After registering with the BC PNP, a registration score – referred to as the SIRS score of that applicant – is allotted to the applicant. Their profile is then entered into a selection pool for that specific category.

The profile then remains in the pool of candidates until invited to apply, or up to 12 months.

Eligible registrants – under the categories of International Graduate, Skilled Worker, Entry Level and Semi-Skilled – are invited to apply under BC PNP’s Skills Immigration.

Invitations issued by British Columbia are as per the processing capacity of the BC PNP as well as the annual nomination allocation.

Those invited have up to 30 calendar days, from the date of receiving the invitations, to submit their complete application to the BC PNP.

The highest-scoring registrants from the selection pool are invited in the BC PNP draws held. Those not receiving an ITA by the BC PNP might take steps for improving their SIRS scores, by getting a better score in the English proficiency test etc.

After receiving an invitation to apply, a complete application can be submitted online, within 30 days.

International Post-Graduate and HealthCare Professionals do not require an invitation and can apply directly through BC PNP Online.

Following an assessment of the application, the candidate will then be nominated by the BC PNP. The Nomination Certificate can be used for applying for permanent residence in Canada.

Canada PR applications are submitted to Immigration, Refugees and Citizenship Canada (IRCC). Granting Canadian permanent residence to an individual is the sole prerogative of IRCC.

The last stage of the process involves receiving a provincial nomination and applying to IRCC for Canadian permanent residence.

Canada is the most popular country for migrate overseas. As per a report, 92% of newcomers in Canada agreed that their community was welcoming.