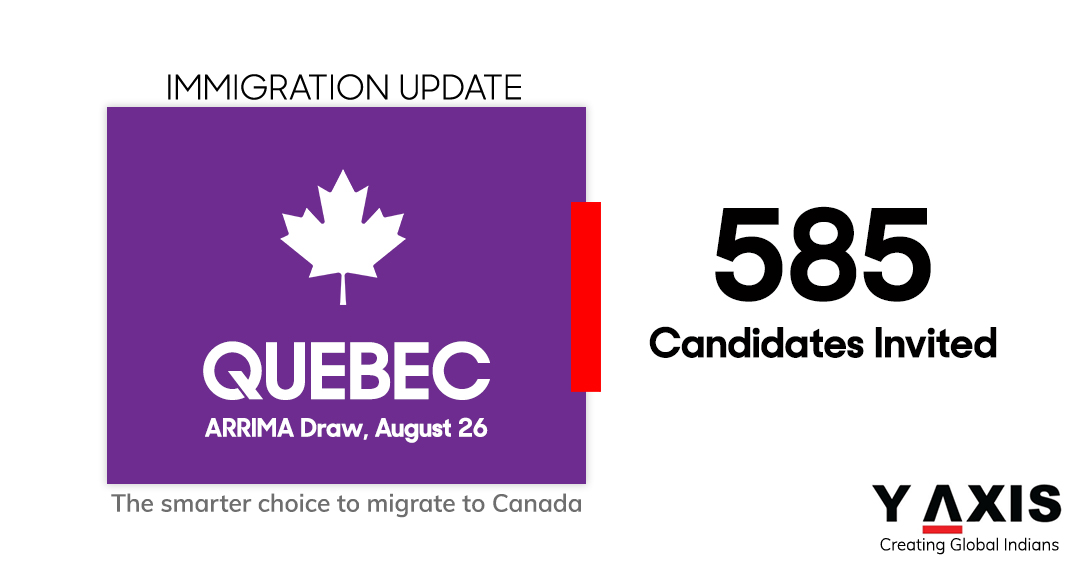 Quebec held its draw for the third time in August 2021. This is the eighth draw in this year for Quebec and brings the count up to 2,145, the number of candidates who were invited to apply for permanent selection.

The province has released the results of the third draw in the last month, on August 26.

This third draw was held via Arrima expression of interest system. August is the largest of the year, holding three draws under Quebec Regular Skilled Worker Program (QSWP).

The MIFI (Ministère de l’Immigration, de la Francisation et de l’Intégration) has issued these 585 invitations under Quebec Regular Skilled Worker Program (QSWP) with a score of at least 517 in the Arrima pool.

In August 2021, Quebec has already conducted two rounds of invitations through Arrima. One was held on August 12, and the other is on August 19. In both the draws, the number of candidates invited exceeded 500, which is more than any other draws held this year.

The latest draw held on August 26, 2021, also targeted candidates with a valid job offer outside the Montréal Metropolitan area who work in occupations that are in high demand in the province.

Below is the list of occupations, along with their National Occupational Classification (NOC) code:

The Quebec Regular Skilled Worker Program (QSWP) is for skilled workers who are willing to migrate and have a settled life in Quebec. This QSWP especially encourages skilled workers and international graduates.

If the candidate is willing to settle in Quebec, then the profile of the applicant will be assessed under a different system compared to other provinces in Canada.

The applicants who are invited to apply for permanent selection should complete the process within six months, which will start from the date of application submitted to process the application. This includes the submission of checklist documents and forms required.

If the candidate’s application is successful, then they will receive CSQ (Certificat de sélection du Québec) or Quebec Selection Certificate, which can be used to apply for permanent residence to the Canadian federal government.