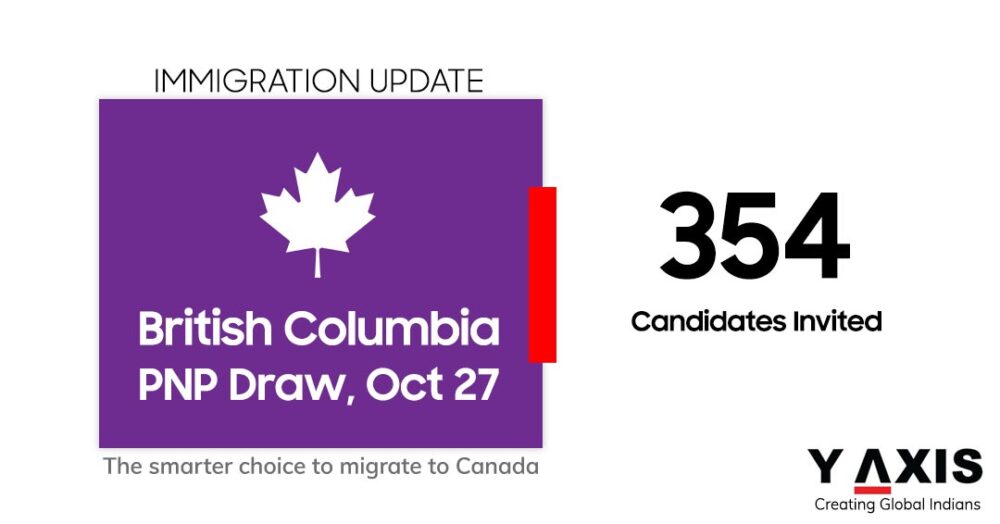 In the latest round of invitations held on October 27, 2020, the British Columbia Provincial Nominee Program [BC PNP] has invited 354 Canadian immigration candidates to apply for a provincial nomination.

The province of British Columbia has a high demand for skilled workers exploring options for work overseas in Canada. BC is expected to have 861,000 job openings between 2019 and 2029.

Candidates that received invitations in the latest BC PNP draw were those eligible for 5 separate immigration pathways under the BC PNP.

Express Entry candidates that are nominated through any of the PNP pathways linked with the federal Express Entry system are allotted 600 additional points towards their ranking score. Referred to as the Comprehensive Ranking System [CRS] score, it is the CRS that determines which candidates are invited from the Express Entry pool.

The higher the CRS, the sooner is the candidate invited by Immigration, Refugees and Citizenship Canada [IRCC] to apply for permanent residence in Canada.

Hence, a provincial nomination through Canada’s Provincial Nominee Program [PNP] is a guarantee of being issued an ITA in a federal Express Entry held subsequently.

Skills Immigration [SI] stream of the BC PNP is for skilled workers that have the skills, experience and well as qualifications required by the employers in British Columbia.

Express Entry BC [EEBC] stream is linked with the federal Express Entry system of Canada. The EEBC stream provides an expedited Canada immigration pathway for skilled workers that intend settling in the province.

In order to be considered by the BC PNP for the SI or EEBC categories, a candidate must first create a profile through the BC PNP’s Online Portal. Following successful registration with the Skills Immigration Registration System [SIRS], a score will be allotted to the candidate based on their potential of thriving in BC.

This score will determine whether they are issued an invitation in subsequent BC PNP draws that are held. The minimum score required varies from draw to draw as well as from sub-category to sub-category.

Note. – The exact number of invitations issued under each of the sub-categories targeted under a draw is generally not disclosed by the BC PNP.

According to the BC PNP, certain occupations have not been included in the October 27 BC PNP draw due to the “impact of the COVID-19 pandemic on BC businesses”.

The largest PNP draw by British Columbia in 2020 was held on September 29 wherein a total of 450 invitations were issued to apply for a BC PNP nomination.