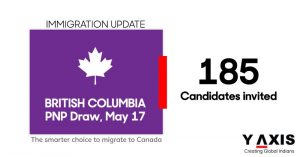 In the general category, 154 candidates are invited under five BC PNP streams and the minimum score ranges between 76 and 123. In the targeted category, 21 invitations were sent to the skilled workers and international graduates. The minimum comprehensive ranking system score is 62 for these candidates.

Another stream in the targeted category includes health care professionals and five invitations were sent to them. The third stream includes skilled workers and international graduates under the NOC 3413.

The details of the draw have been shown in the following table: