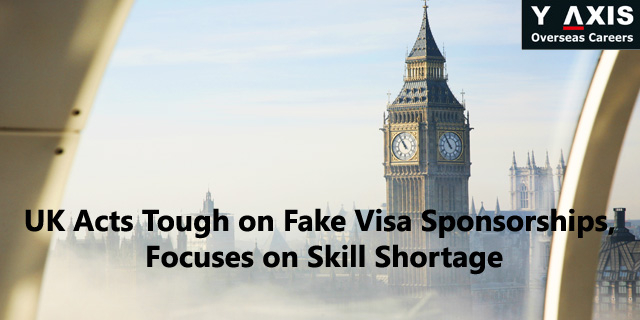 The UK government began a crackdown on fake tier-2 visa sponsorships that will send thousands back to their home countries. An estimated 2,500 foreigners working as highly skilled workers will have to leave the country.

The government is worried that bogus Tier-2 Visa sponsorships have resulted in many illegal jobs in the past and the picture is getting worse. Jobs in petrol pumps, kebab shops, massage parlours, etc. are advertised as skilled positions to lure foreigners on a Tier-2 Visa.

Immigration and Security Minister James Brokenshire said, “We’ve all heard the stories under the last government of people on skilled visas working as takeaway drivers – but our reforms are cracking down on abuse.”

He is quoted in Express (Home of the Daily and Sunday Express) saying, “Crackdowns like this are yet another example of how we are building an immigration system that works for British nationals and legitimate migrants.”

The statistics of Tier-2 visa suggest that only 1.7% visa applications were rejected in 2008, however, with the new government in place, the rejection rate has gone up to 37%. Now getting a Tier-2 visa has become very difficult. But not for those with genuine sponsorships and good job profiles and job offers that pay more than £40,000 per annum.

Express (Home of the Daily and Sunday Express) also cited the UKIP Member of European Parliament (MEP) Mr. Steven Woolfe. He said, “Employers should not be able to employ a foreign worker unless they are skilled and earn more than £40,000 per year and more staff should be employed to check that the rules are enforced.”

“Only then will we really be employing the skilled managers that the system was meant to do and not be used to undercut wages in the UK.”

The crackdown is underway, thousands are expected to be send back for illegal jobs and fake visa sponsorships. The government will ensure that job advertised, the size of the business and its requirements are all genuine and contribute to UK’s economy in the long run.

On the other hand, UK is facing a crisis when it comes to skilled workers. The skilled force numbers for 2014 have been disappointing. An article published on BBC in December 2014, hinted at the growing skill shortage in the UK.

It said that the skill shortage has increased from 9 areas to 43 areas in last few years and there is immense shortage of engineers from all domains – from mechanical to civil to software and electrical.

Then there is also a high requirement for doctors, nurses in the NHS, and teachers in schools and universities, but immense scarcity of talent.

Job openings are in plenty. The UK has created 700,000 jobs and the unemployment rate too is going down, but ‘severe shortage’ of the skilled is hurting the UK economy badly. If the shortage continues for long, it may also hamper the economy in the long-term.