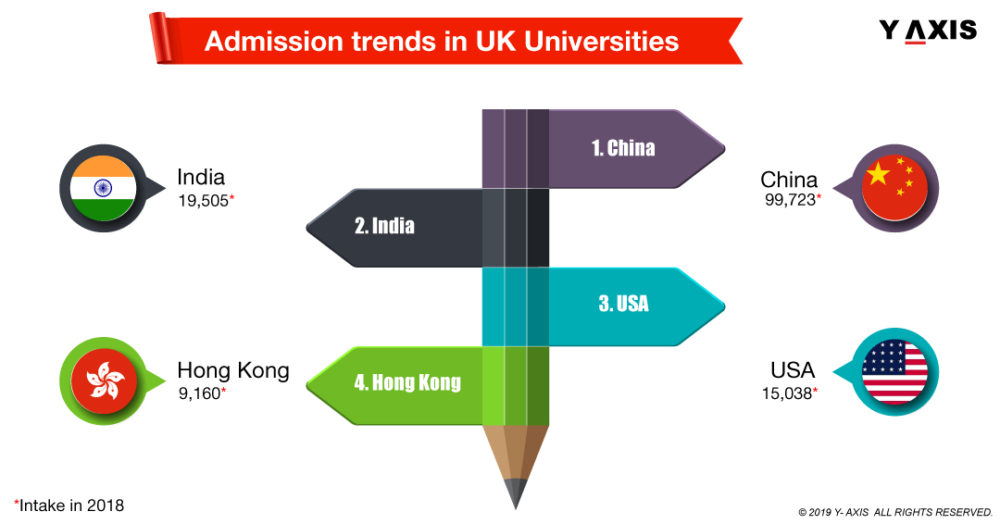 The United Kingdom is emerging as a popular study abroad destination going by the admission trends in the last year.The UK has seen a significant increase in the number of students in 2018. According to the Higher Education Statistics Authority (HESA), 241,054 Tier 4 (Sponsored study) visas were granted which is an 8% increase from the previous year. In fact this is the highest level since 2011.

In the same year, the sponsored applications for the Higher education (university) sector increased by 10% compared to the previous year. Sponsored study visas are given to students wishing to study in schools or applying for further education or higher education in the UK.

The country- wise distribution for Tier 4 (sponsored study) visas is given below:

According to the 2019 report of The Higher Education Statistics Authority (HESA), there was an 8% increase in the number of non-EU entrants out of which 41% were from China. The year saw a rise in the number of Indian students in comparison to the period between 2011 to 2017. Among non- EU entrants, the highest percentage was for postgraduate courses which stood at 43%.

There was also a 10% increase in sponsored student visa applications for the higher education sector. The increase in numbers can be partly attributed to students getting their visa before course commencement.

In the same period, 114,202 short-term study visas were granted, which was a 7% increase from the previous year. The short-term study visa allows students to come to the UK for a period of 6 months or 11 months if they are opting for an English language course. However, this visa cannot be extended beyond this period.

UK’s growing popularity as a study abroad destination is bound to grow if the plans to provide students with a post-study work visa materializes.