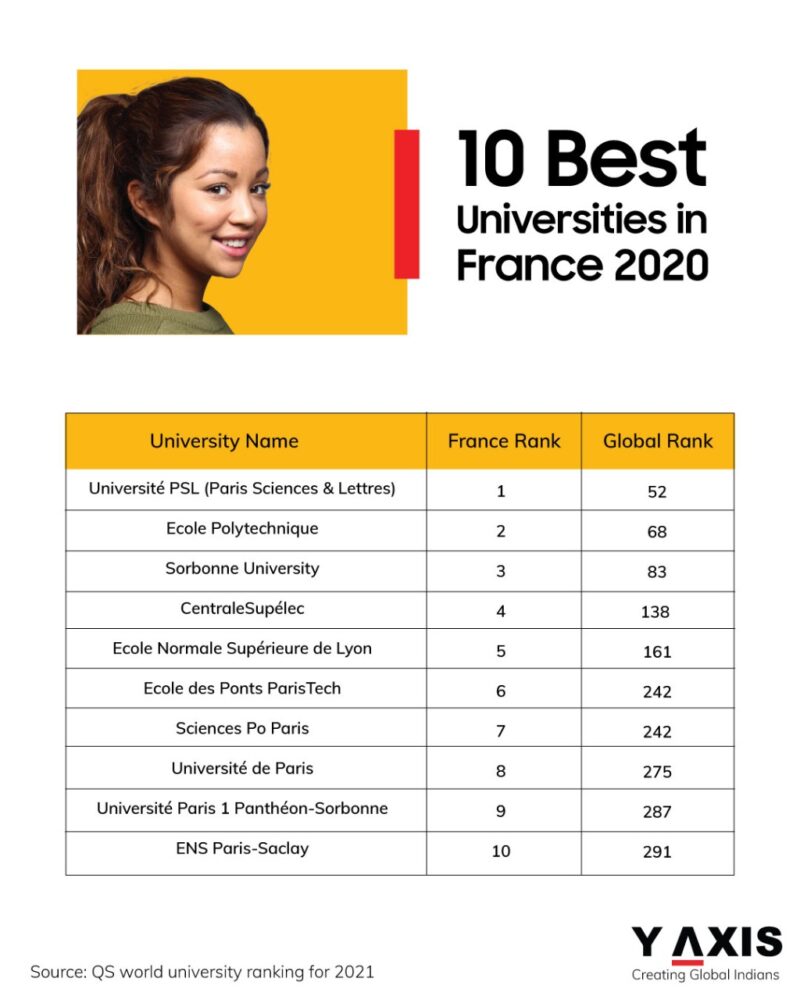 You can find schools, universities, and institutions that are specifically dedicated to the topic you are most interested in when you study in France. And because France has always managed to produce some of the greatest minds in business, economics, science, and art, you can be sure that you will get the best quality of higher education. France has joined other European countries in offering courses in the English language, so it is no longer mandatory to know French to study in France.

Paris Sciences et Lettres Research University (PSL), a collegiate university formed in 2010 and composed of nine constituent colleges, including the highly selective École normale supérieure (ENS Paris), continues to be ranked 52nd in the world and ranked first among the top universities in France.

École Polytechnique ranked jointly 68th in the world in five places and is the founding member of the University of ParisTech, which specializes in science and business courses.

Situated 30 km outside the city center of Paris, the campus offers 120 hectares of green space to its 4,600 students.

Centrale Supélec is ranked 138th in the world in 2021 and was formed by the 2015 merger of the École Centrale Paris and the Supélec engineering graduate school. It is a founding member of the Université Paris-Saclay, a research-intensive association of French universities.

The École Normale Supérieure de Lyon is slightly down this year to rank 161st in the world but still remains fifth among France’s top universities.

Another of the great schools, École Normale Supérieure de Lyon is a public elite institution that trains humanities and science researchers and teachers.

Ecole des Ponts ParisTech and Sciences Po Paris are up to eight places this year to rank jointly 242nd in the world. It is one of the smaller French universities with just over 2,000 students.

Sciences Po Paris, which is a university specializing in the fields of law, economics, social sciences, politics, history, and related areas. In 2021 it ranks 242nd in the world. It has about 14,000 students, of whom nearly half are international, with more than 150 nationalities on campus represented.

Situated at the center of Paris, this university is a merger of the Universite Paris Descartes, Université Paris Diderot (Paris 7), and the Institut de Physique du Globe de Paris (The Paris Institute of Earth Physics, IPGP).

Université Paris 1 Panthéon-Sorbonne rises to an impressive 18 seats in the world university rankings this year to earn 287th joint place.

The university was established in 1971 from two University of Paris faculties. Today the school specializes in the sciences of economics and management, humanities, and legal and political sciences.

ENS Paris-Saclay, formally known as ENS Cachan, is entering the top 10 for France this year. The school ranks jointly 291st in the world this year after climbing an amazing 21 places.