Sriram and Ansun, 14 and 13 year old Indians, Spelling Bee champs, had the privilege to meet President Barrack Obama in his Oval office on 15th September 2014.

What is remarkable is that the President was humble enough to test his spelling acumen on the two words “Corpsbruder” (a close comrade) and “Antigropelos” (waterproof leggings) that the two teen contenders too couldn’t spell during the contest. 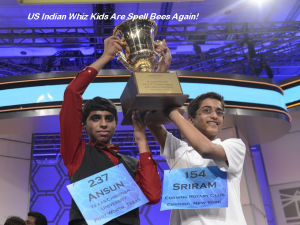 Indians in America have held the distinction of carrying the mantle of Spelling Bee champs for many years. 13 of the last 17 winners have been Indian Americans (from 1999 to 2014), though they make up less than 1% of the US population.

So what makes them different? What ticks them off?

Psychology Today has an interesting take in the form of Marya Hanun’s (a blogger for Foreign Policy) analysis to the success. She believes, “part of the answer can be found in India’s educational system, which emphasizes rote learning and memorization. She also notes that spelling bees represent “a way for Indians to assimilate” and that “highly skilled immigrants tend to enroll their children in more academically oriented extracurricular pursuits.”

Champs who have made us proud! The Scripps National Spelling Bee is a competition held annually in Washington over a two-day period at the end of May or beginning of June. The competition is primarily an oral competition conducted in elimination rounds until only one speller remains. The first round consists of a 25-word written test, the remaining rounds are oral spelling tests. The competition has been declared a tie four times, in 1950, 1957, 1962 and 2014. As of 2014, 47 champions have been girls and 44 have been boys.

It is a time-tested theory that in order to understand and assimilate a culture, the best way is to learn its language and Indians abroad have proven that they are good at it. The world media has never understood our penchant for the language though we have many of our own. Little do they realize that mastering English is a step towards success!

For more news and updates on immigration and visas, just visit Y-Axis News.