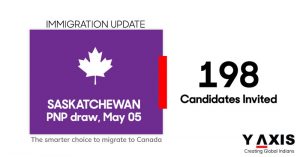 Saskatchewan, a province of Canada, has issued another round of invitations for the third time in 2022, under the Canadian permanent residence. 198 invitations have been issued under the Saskatchewan Immigrant Nominee Program (SINP) for the skilled workers to apply for the provincial nomination.

The skilled workers invited under the following streams

The available categories under the Saskatchewan immigration program:

Under the Occupations In-Demand and Saskatchewan Express Entry streams, the candidates have been sent invitations which the SINP issues, to apply in the provincial draws held time and again that fall under the ISW category.

The SINP’s ISW category is primarily for the overseas skilled workers who want to make a living and work in Saskatchewan as permanent residents. Three sub-categories are available for the skilled workers to apply under. Ann individual must meet specific requirements to be eligible.

The ISW streams are:

A PNP nomination is worth 600 CRS points for an Canada Express Entry immigration candidate. The ranking score that the CRS implies is given based on the Comprehensive Ranking System.

Planning to Migrate to Canada from Australia? Get guidance from Y-Axis, the leading Overseas Consultant in Australia.

If you found this blog engaging, you may also like..
Engineer who migrated from Adelaide to Saskatchewan in Canada