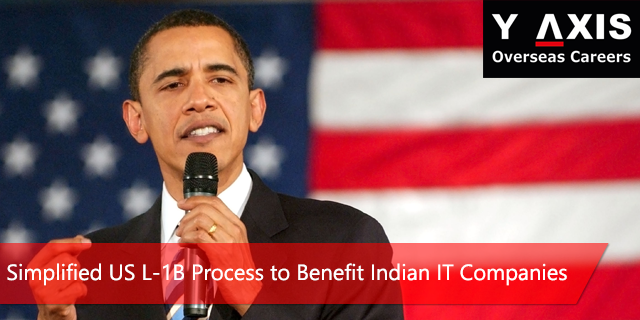 Some good news and relief for the Indian IT companies as President Obama has finally announced easing of L-1B work visas process. It means corporate executives of Indian companies in the US can get a work visa without much difficulty. It also means that IT companies can bring their employees to the US for work.

The Economic Times quoted President Obama’s speech in which he said, “I’m pleased to announce a new action I’m also taking to make it easier for global companies who are present here today to launch and invest in the US. My administration is going to reform the L-1B visa category, which allows corporations to temporarily move workers from a foreign office to a US office in a faster, simpler way.”

“And this could benefit hundreds of thousands of non-immigrant workers and their employers, that in turn, will benefit our entire economy and spur additional investment,” President Obama said at SelectUSA Summit.

“One of the things that would make America even more attractive to businesses and that would grow our economy and shrink our deficits, and keep this country safer, stronger, and smarter, would be a comprehensive immigration reform package,” he said.

Indian companies willing to bring their employees to the US have always had a tough time with the visa rejection rate being really high. It has limited Indian companies to bring temporary workers to the US, but had also reduced the Indian investment in the US economy.

Now that the US government is easing L-1B process, the US could witness an increase in foreign investment. The Indian IT companies can also breathe easy as this comes as a major step concerning temporary work visas.