News from Taiwan: Retaining and Hiring Foreign Talent Gets Easy from 2016 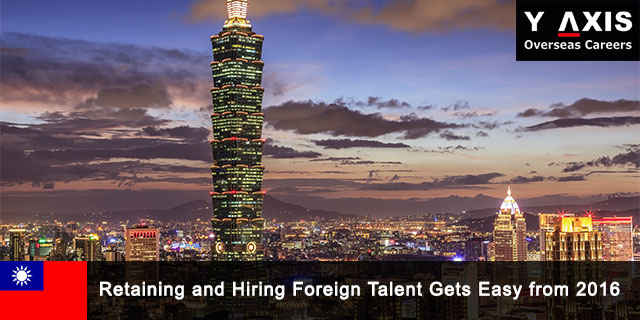 The Taiwanese Government has made the decision to change its current immigration policy to ease the retention and hiring of foreign laborers, professionals and students. The decision was made by Premier Mao Chi-kuo as a large numbers of skilled workers, i.e., 180,000 plus workers are leaving Taiwan every year, as estimated by Taiwan’s National Development Council. Earlier directives needed companies to have a paid-in capital of (New Taiwan Dollar) NT$ 5 million and sales of above NT$ 10 millions. Moreover, white collar professionals previously required two years of work experience to qualify for a work visa in Taiwan. Also, current rules require foreign professionals to leave Taiwan after twelve years of service; in contrast, newer rules allow employers to retain skilled workers after just nine years in Taiwan. This ruling helps small to medium scale businesses to retain and hire required talent from abroad.

The new ruling by the Minister of Labor will bring in an estimated 6000 to 7000 expats a year, which brings the total number of foreign nationals in Taiwan to around 26,000 to 29,000. It also adds onto the previous ruling of workers earning a minimum NT$ 47,971 to qualify for immigration. As the policy changes, professionals earning less than the aforementioned amount will be assessed on a point based system. If the points add up to 60 points based on professional skills, language skills and academic background, then the foreign workers can stay regardless of income. This allows employers to retain 1,500 workers a year. The decision also allows the immigration of dependents.

In addition, statistics show that around 80% of expats want to move to other Asian countries like China, Japan, Korea and such because of current situations in Taiwan. The Taiwanese Government hopes that the changes to its immigration policy can close the gap that currently exists. Coming to the student’s pool in Taiwan, more than 2,000 Chinese students can now apply to stay back and find work in Taiwan, which was not allowed earlier. Changes are said to take effect from the beginning of the New Year.

For more news updates on Taiwan or immigration news from other countries, subscribe to our newsletter at y-axis.com