Everything You Need to Know About H-1B Visa 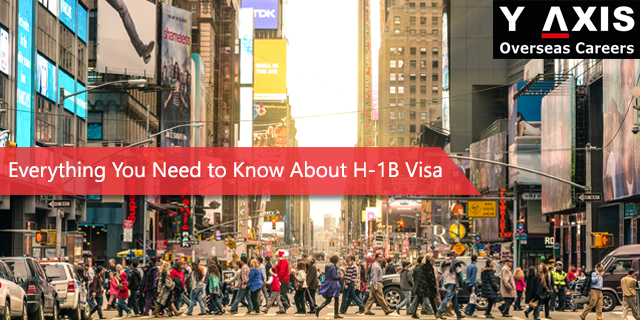 Let us begin with what H-1B visa is and how it works. It would give you an insight on the subject, allowing you to take a closer look as to why obtaining a US work visa still remains an intricate task in this era of globalization.

H-1B is a non-immigrant job visa for highly-talented foreign skilled workers mostly from STEM (Science, Technology, Engineering and Mathematics) background. It lets US employers employ foreign workers in specialized fields to work in the US for a period of 3 years.

This visa category is popular with international students holding an Advanced Degree/Master’s degree from a US university, and also among foreign skilled workers who could submit a petition to move to the US after being extended a contract by a US employer. The sponsoring employer has to file a petition with USCIS.

How Does H-1B Selection Process Work?

The quota opens each year on April 1, calling for applications from aspiring employers and candidates: 65,000 is allocated for regular quota and 20,000 is for individuals with a US Master’s or an advanced degree. From day one of opening of quota, USCIS is flooded with applications from all parts of the world with India and China making the most of the opportunity.

USCIS will continue to accept all other H-1B applications other than combined quota of 85,000. Petitions may include:.

Every time you hear about H-1B overhaul, you could also hear the voices that vehemently oppose the move. It has become a subject of never-ending arguments both in the US and among highly educated and skilled global workforce.

Each year the H-1B quota opens inviting US employers and skilled professionals to submit their application for the work visa. And by the time people realize the quote for succeeding Fiscal Year is open, it’s already closed. USCIS receives more petitions than an overall quota of 85,000 H-1B vacancies. As a result, in less than a fortnight USCIS stops accepting applications and begins the selection process, conducts lotteries and shortlist candidates.

Few lucky ones selected through a lottery head to America, with a grin on their face and head held high, to put their skills to use and to fulfill their dollar dreams. For the ones not on the list, it’s ‘better luck next time,’ a chance they know would never come, or at least not too soon.

On the other hand, the wait for American employers longing to add skilled workforce to their elite teams gets longer. Therefore, the US is debating the H-1B quota all over again. This time the call is quite close to the finish line because President Obama has vouched for the move and made this a part of the immigration reforms announced in December 2014.

Meanwhile, during President Obama’s recent India visit: Deputy National Security Advisor Ben Rhodes said, “I think what the President indicated is this is the type of issue (H-1B) that we have approached through the context of comprehensive immigration reform and so, given his ongoing efforts to work with Congress in pursuit of comprehensive immigration reform, we would be incorporating these types of issues in that process and would be in touch with the Indian government as that moved forward.”

US Federal District Judge has passed a judgment that indefinitely blocks President Obama’s immigration reforms. The decision comes right before a day when America was to start accepting applications for work permits from illegal immigrants. The immigration reforms are put on the back burner again putting hopes of millions on hold.

So only time will tell if President Obama’s immigration reforms and H-1B overhaul will become a reality or the wait will get longer. In the mean while, aspiring H-1B can have their applications ready to file before H-1B quota opens on April 1, 2015 for FY 2016. Good luck!