France, UK to Get VoA, China Yet to Be Included 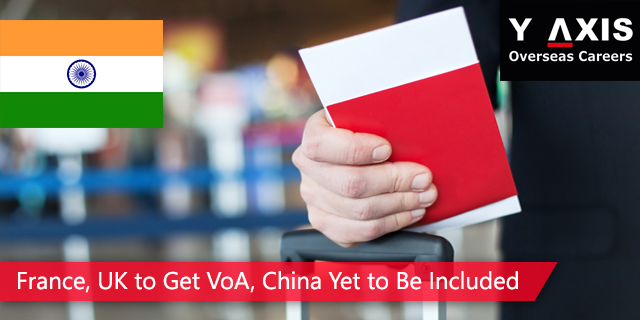 India is preparing a fresh list of countries to offer Visa-on-Arrival facility. The United Kingdom, Spain, Italy and France have already made the cut, while China is still being debated by the Indian government.

NDTV reported a senior official saying, “We don’t see much problem in these countries.” The official speaking about China also said, “We are trying to work out a way wherein security concerns are addressed and it is easy to get visas as well.”

E-Visa for China is still under consideration because of security concerns and also because of stapled visas by China to residents of Arunachal Pradesh.

Prime Minister Narendra Modi is expected to Visit China this year to discuss various issues including easy visas for nationals of both the countries. If discussions are fruitful, India would likely extend TVoA-ETA (Tourist Visa on Arrival with Electronic Travel Authorization) scheme to Chinese visitors as well.

During the recent budget session, Arun Jaitley, the Finance Minister of India, has announced that India would extend Visa-on-Arrival to nationals of as many as 150 countries. In line with the same proposal, India is expected to release a list of E-Visa beneficiary countries in a couple of days.

Whether China will get E-Visa facility to India or not remains unclear for now. So we will have to wait until an official announcement is made by the government.