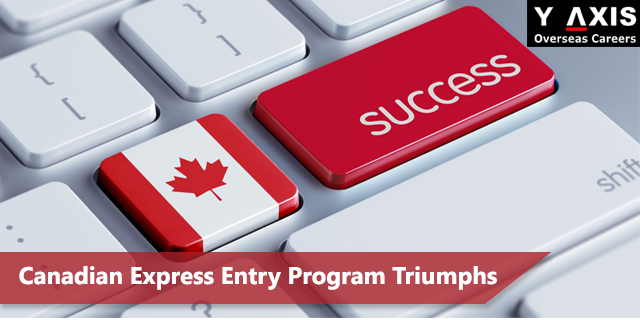 Canada’s Express Entry Program is yielding positive results, albeit in small measure, for the time being. The Government of Canada launched the Express Entry Program on January 2, 2015 to accelerate visa applications received by them under various immigration programs prevailing in Canada. When a candidate meets the requirements of a particular program, he is placed in an Express Entry Pool. He earns a certain number of points on the basis of his age, education, skills, family, transferrable skills, offers received by prospective Canadian employers etc.

The first draw took place on January 31st and 779 applicants were called upon to apply for Canadian PR. Once the application is received, it is processed within 6 months or even less. Professionals who made the cut in the first draw spanned diverse fields like natural and applied sciences, industrial, electrical and construction trades among others. This definitely is a boost to Indians with a staggering number of our populace working or studying in these areas.

The first draw was limited to valid job holders or provincial nominees – the good news is that future draws will include applicants who are yet to obtain employment or provincial nomination. Applicants need not be anxious about the next draw as Citizenship and Immigration Canada (CIC) will be conducting draws more frequently. Also, the size of the draw will be bigger resulting in more Invitation to Apply (ITA) being sent out, an uplifting feature for PR aspirants.

Citizenship and Immigration Minister Chris Alexander has noted that all the applicants who received the ITA in the first draw already had a valid job offer or a provincial nomination. Thus, he claimed, the Express Entry system was successful in filling the gaps in Canada’s labour market leading to a win-win situation for both employers and employees.

For more details on Canada Express Entry, feel free to contact us!