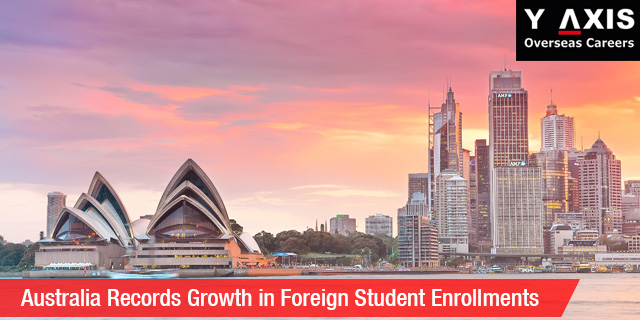 Australia has recorded a jump in international student enrollments in Australian universities in 2015. As many as 147,000 foreign students started their education in Australia in the first quarter this year, compared to 142,400 the same period in 2014. The number is said to be the highest so far in a single quarter in Australia’s history.

The Sydney Morning Herald has reported that 35% of students enrolled in higher education came from China, followed by 23% from India. And most vocational enrollments came from India contributing 18% of the total and 7% more than those from China.

The numbers could grow further because of the recent announcements by the government of Australia. It has brought some positive changes to the student visa rules and intends to reduce student visa categories from the current 8 to just 2 in the future and also give students a stay of 18 months after completion of their graduation. The move will encourage more pupils to apply for studies there.

The proposed changes has brought a sigh of relief and happiness among universities and colleges in Australia and also among the foreign students willing to study there.

Students coming from India, China and other parts of the world contribute immensely to Australia’s economy each year. According to the Financial Review, education exports are worth $17.5 billion yearly, and continue to grow year after year.

The lower AUD value, 18 months work permission after graduation, and other such benefits together are contributing to growth in enrollments. And the Abbott government is leaving no stone unturned to make the most of this billion dollar education industry.