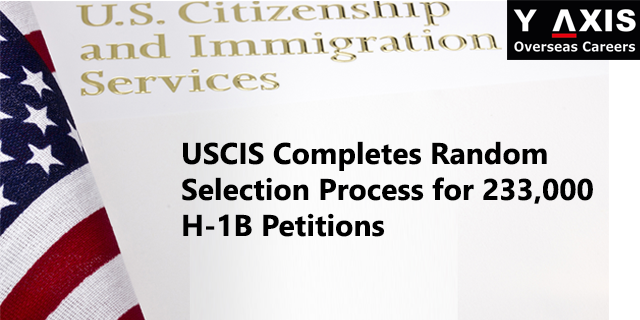 USCIS started accepting H-1B applications on 1st April as it does every year and the response was no different – 233,000 petitions in just 5 days and the cap was closed until next year. Soon after the cap was reached, USCIS released a note confirming the same. The release said that for FY 2016, it received more than the statutory cap of 65,000 visas and 20,000 for master cap.

And more than a week later i.e. on 13th April, USCIS completed the computer generated random selection process or lottery to select petitions required to meet general-category cap and advanced degree exemption cap. All the remaining applications not selected through the process will be rejected and returned with the filing fee to the applicants.

The random selection process or lottery works something like this:

So the above two steps are already done. Now, what remains is the premium processing of the cases selected under lottery. USCIS has already released an expected date to process these applications and it would be no later than 11th May, 2015.

The closing of FY 2016 cap and completion of selection process does not affect the following:

U.S. Citizenship and Immigration Services (USCIS) will continue to accept and process the applications it receives for the above mentioned categories.

Meanwhile, the debate to scrap H-1B cap continues in the US. The Times of India reported Lynn Shotwell, Executive Director of the Council for Global Immigration, saying, “Year after year, the government falls back on a lottery system to determine which US employers will ‘win’ the ability to hire top world talent. This year, employers had a mere 36% chance of being granted an H-1B visa. US economic growth should not be left up to this gamble.”

H-1B visa is a popular visa category for foreign workers with experience in STEM (science, technology, engineering and mathematics) fields.

Source: USCIS | The Times of India