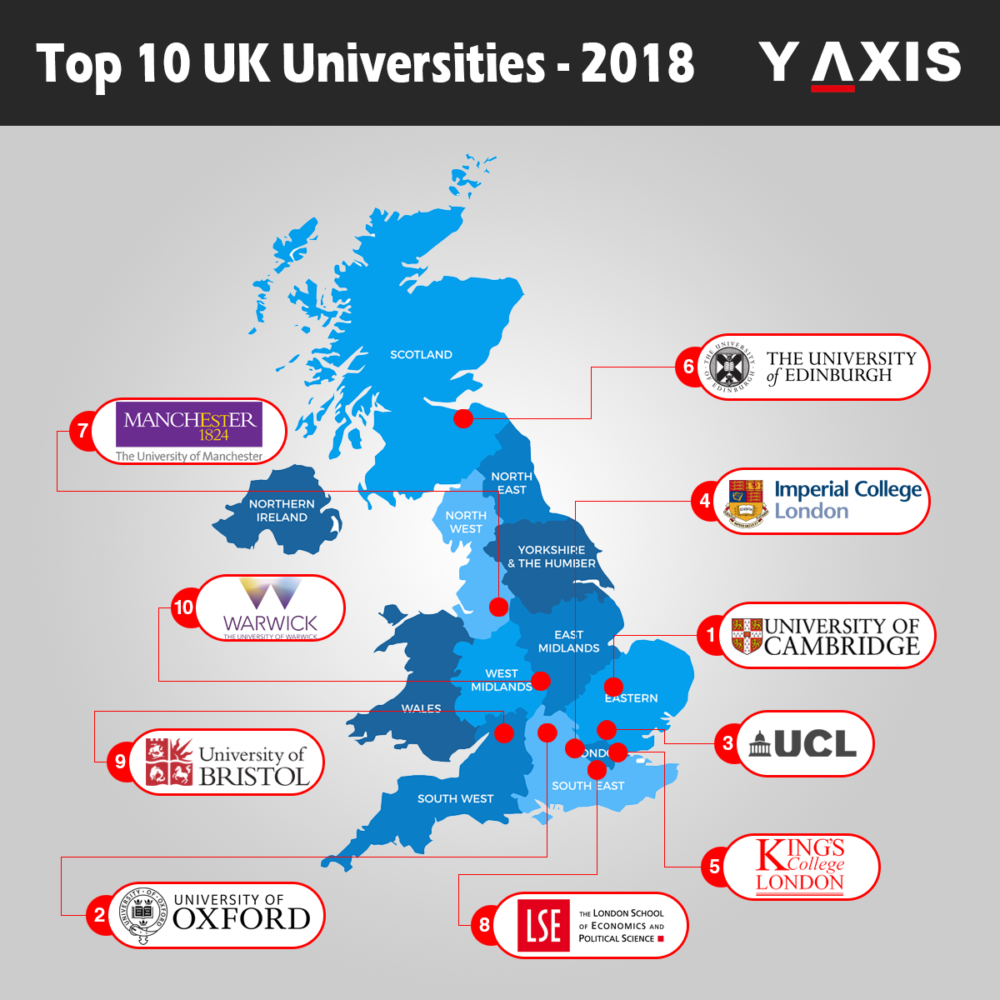 4 UK Universities have secured a place in the top 10 QS World University Rankings 2018 and below are the nation’s top 10 universities:

Retaining its top position amongst the UK universities this year too is the University of Cambridge that was established in 1209. This makes it one of the global oldest universities and it has around 19,000 students as of now.

This university is the oldest in the English speaking university globally and has several extremely successful alumni to its credit. These include 27 UK Prime Ministers, 30 global leaders, and 50 winners of the Nobel Prize, as quoted by the Top Universities.

University College London terms itself as the Global University of London. This is definitely mirrored in the diversity on its campus as out of its 38, 900 students, more than 15,500 are from outside the UK.

This is the fourth and last amongst the UK Universities to find a place in the global top 10. It is an institution predominantly based on science focusing on the development of technology and its practical applications.

KCL is reputed for its research and medical education. This is also the home to the first nursing school in the world – Florence Nightingale Faculty of Midwifery and Nursing.

Established in 1582, it is the fame of this university that has helped in the city earning the nickname as the ‘North Athens’. It has secured a place in the top 5 UK Universities owing to excellence in research.

This is the largest solo-site UK university having 39, 700 students from 16 nations. It has been credited with 25 winners of the Nobel Prize and is a member of the renowned Russell Group of UK universities.

LSE was established in 1895 and focuses on Social Sciences. It has a diverse student body with more than 7,500 overseas students out of the total 10, 880.

It is another UK university member of the Russell Group. Established in 1876, it is the largest autonomous employer in the Bristol City with a student strength of 22, 300.

The University of Warwick is actually based in the Coventry city outskirts. It is home to the largest of its kind in the UK outside London – the Warwick Arts Centre.

The University of Toronto is once again the number one amongst the Top 10 Canadian Universities – 2018 even this year too. It has around 88,700 students at its 3 campuses located in Toronto.

If you are looking to Work, Visit, Invest, Migrate, or Study in the UK, talk to Y-Axis, the World’s No.1 Immigration & Visa Company.