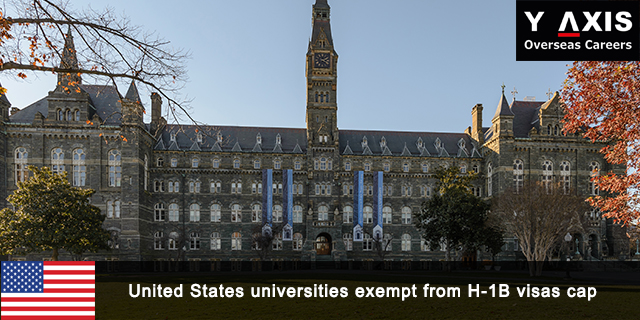 Exempt from the H-1B temporary work immigration visa cap, US universities have become one of the biggest employer industries in the US. Recent data indicates that universities in the US have bypassed the annual cap of 85,000 H-1B visa quota; 65,000 for foreign immigrants and 20,000 for domestic workers. In addition, data says that educational institutions have hired around 100,000 workers in the last five years.

According to Breitbart News ‘H-1B hires include 21,754 professors, lecturers and instructors, 20,566 doctors, clinicians and therapists, 25,175 researchers, post-docs and biologists, plus 30,000 financial planners, public relations experts, writers, editors, sports coaches, designers, accountants, economists, statisticians, lawyers, architects, computer experts and much else.’ Legally, universities do not have any obligation to hire American workers as per the law passed by former US President George W. Bush in 2006. They can hire white-collar professionals at low wages to work for outsourced jobs at universities. Most of these foreign workers do not immigrate permanently to the US but go back once their contract is done with.

Apart from H-1B hire, studying in the US allows for a post study work visa called ‘Optimal Training Program’ to students on the F-1 study visa to work for a duration of 12 months or 29 months, depending on the duration of the program.

So, if you are looking to immigrate to any US university for work, research or as a student; please fill our enquiry form so that one of our consultants will reach you to entertain your queries. For more news updates on ­­­immigration to the US, subscribe to our newsletter at y-axis.com