Newark got the highest number of H1-B visas 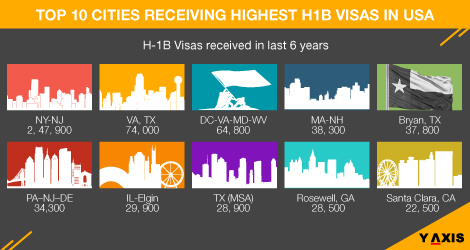 Newark, New York received the highest numbers of H-1B visas in the last 6 years with 2, 47, 900 visas. Majority of the approvals for H-1B visas are concentrated along Texas and East Coast in contrary to the general perception. The statistics have been revealed by the National Foundation for US Policy and Statista.

Top high-profile US tech firms have been awarded increased numbers of H-1B visas in 2017 in comparison with 2016, as quoted by the Times of India. These are amongst the top 10 firms receiving approval for H-1B visas including Intel, Google, Microsoft, and Amazon.

The majority of the applications for the H-1B visas are submitted by the business related to IT. These include Computer System Design and allied services followed by Colleges and Management.

On the other hand, there is a steep decline in the H-1B visa applications from India that were successful in 2017. Only two of the top 7 Indian firms that witnessed an increase in the approvals for H-1B visas in 2017.