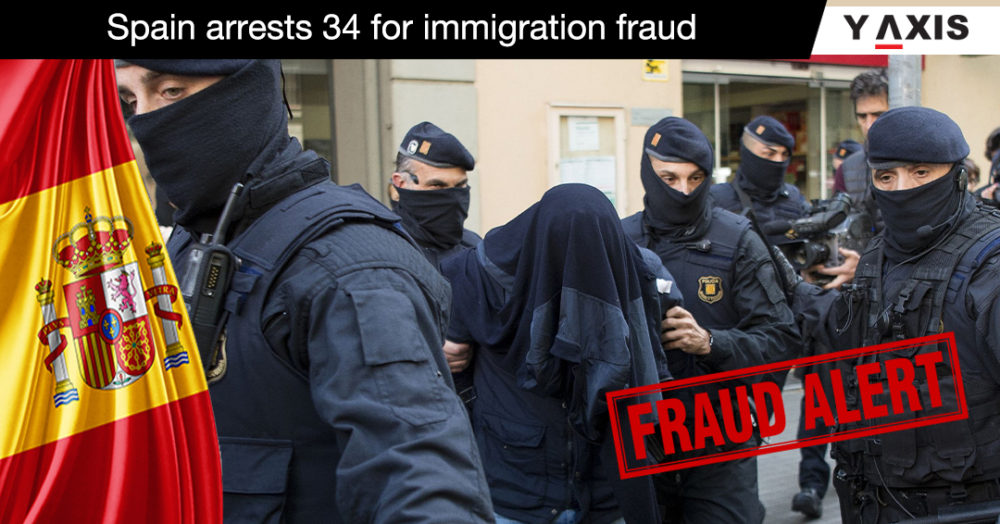 In February 2020, the Policia Nacional of Spain detained 34 for their alleged involvement in illegal immigration. In a police operation called ‘Llama’, the police agents arrested 6 Spaniards and 28 foreigners.

Those arrested were held by the police for various crimes – belonging to a criminal organization, promotion of illegal crime, and forgery.

Arrests made were from 3 different places –

The investigation was launched following reports pointing towards the existence of a certain group of people allegedly involved in the fraudulent movement of foreigners in Spain.

It was found that the network had a 3-level structure, with each of the structures performing distinct roles.

The first level was made up of a Moroccan citizen and a Spanish citizen. Together, they used to run an operations centre wherein false lease contracts were drawn up. Other fake documents were also made.

The second level comprised people that were to appear as landlords.

At the final level were foreigners that would make use of these fraudulent contracts for applying for residence permits.

Operation ‘Llama’ by the Policia Nacional of Spain ended with the dismantling of the network and the arrest of 34 people for their alleged involvement in the immigration scam.

Residence permits that have been obtained fraudulently can be cancelled. The cancellation is usually followed by an expulsion of the residents with such fraudulent permits from the country. Subsequent entry of such individuals at the border might also be prevented.

Always be careful of fake immigration deals that can have far-reaching consequences for all involved.

Immigration is an investment, both of time as well as money. Make your investment count with someone that you can trust.

With Y-Axis, you can indeed get it right the first time.

Get in touch with us today!

Fake documents can cost you your citizenship