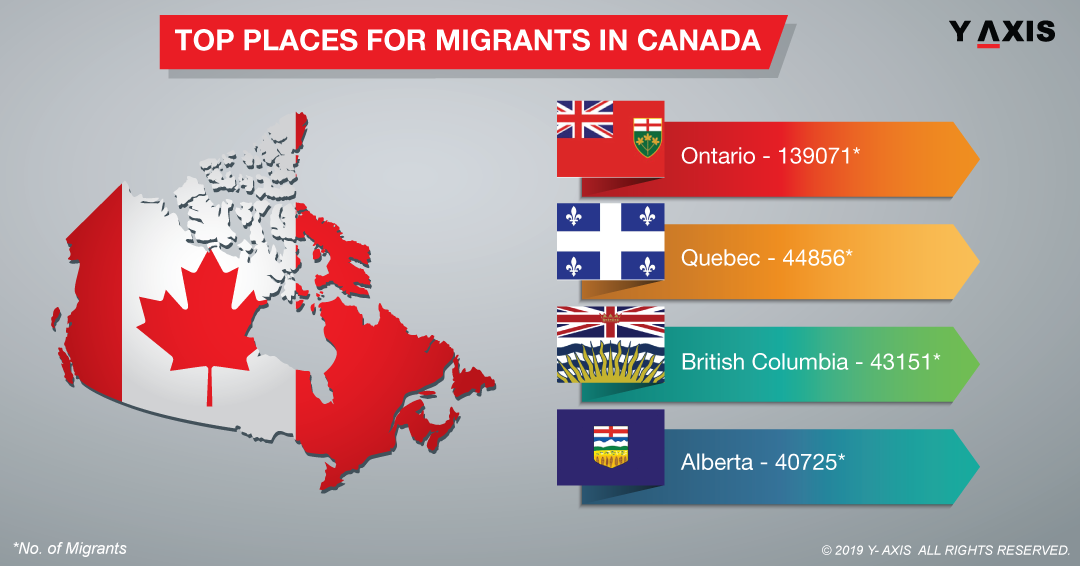 With an admissions target of 341,000 for 2020 and another 350,000 for 2021, Canada is probably the most welcoming of them all if you are an immigrant. A common query that many an immigration consultant get in India is related to Canadian permanent residency, such as the Top 10 places for migrants in Canada?

As per the Report, there is a need for Canada to identify other talent pools for filling the void in the labour force. Immigration is “one of the most important tools at Canada’s disposal”.

Why is immigration important to Canada?

According to the National Immigration Centre –

Immigrants are integral to Canada as immigrants – strengthen diversity and culture; boost trade ties between Canada and the rest of the world; and are innovative, motivated and entrepreneurial.

What are the Pilots launched by Canada for regional areas?

While an increasing number of immigrants are heading towards Canada, a majority of them settle down in prominent cities. To address this issue, Canada has specifically designed immigration Pilots – the Atlantic Immigration Pilot, and the Rural and Northern Immigration Pilot (RNIP) – for diverting some part of the migrant flow to regional Canada.

With the Pilot programs encouraging international migrants to settle down in regional Canada, there are many viable options available for an immigrant to choose from.

Total number of immigrants in Canada in 2019, province-wise: 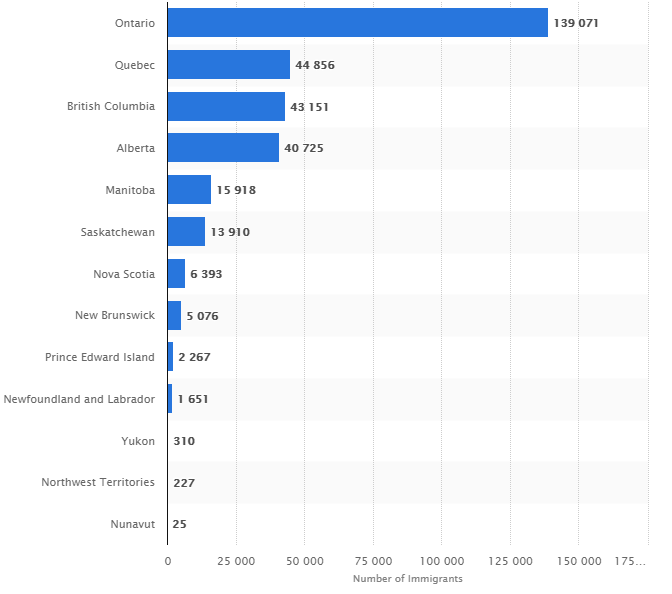 As per Statista, the total number of immigrants in Canada in 2019, by province or territory of residence stood at –

Let us see some of the ideal places for migrants to Settle in Canada in 2020.

Top 10 places in Canada for immigrants

To be considered a good place to immigrate to, a place must fare well on certain set criteria such as – quality of life, strong economy, weather, support systems for immigrants, low crime rate, job opportunities, healthcare, accommodation costs, healthcare etc.

As per Rob Burton, the Mayor of Oakville “We’ve become a very attractive place for people of diverse backgrounds.”

Oakville is a popular choice with migrants as it gives them access to the labour market in Toronto, while letting them live a peaceful life in a suburb.

With its close proximity to downtown Montreal, the tranquil mountainous neighbourhood of Westmount is attracting many young professionals with their families.

Regarded as a real-life winter wonderland, Whistler holds the charm of a quaint little village set amidst majestic mountains.

Located a mere 2 hours’ drive from Vancouver, Whistler is a much sought-after destination for those looking at adventure sports like snowboarding, hiking, or skiing.

Whistler is the ideal place for you if you wish to live in a peaceful, laidback surrounding with a close-knit group of residents that will welcome you into the community.

Lying midway between Calgary and Edmonton, Red Deer is located in Central Alberta.

Red Deer is said to have one of the fastest growing economies in North America. Red Deer is the fourth largest city in Alberta.

Formerly known as Lévis-Lauzon, Lévis is a city located in the southern region of the province of Quebec in Canada.

Lévis lies opposite to Quebec City and is linked to the city by the means of a ferry service. Lévis is a prominent industrial centre in Canada.

A municipal district in the north-eastern region of Alberta, Bonnyville No. 87 is located adjacent to Saskatchewan province on the east.

A primary reason why immigrants prefer settling down in Toronto is due to the existence of residential neighbourhoods right in the heart of the city.

With many migrants heading to Toronto, the city has gradually developed a harmonious multicultural diverse population.

Toronto is truly cosmopolitan to the core.

For migrants that wish to start a family in Canada, Saint-Bruno-de-Montarville is a good option to consider.

In 2017, the city was crowned as the best place in Canada for raising kids.

Added to reasonable childcare costs are a low unemployment rate and affordable housing. All of which make Saint-Bruno-de-Montarville one of the most sought-after cities in Quebec for migrants wishing to settle down in the province with their families.

In terms of costs of accommodation and various other expenses, Camrose is an affordable place to live in.

With a good disposable income and a better quality of life, migrants generally find Camrose a nice place for settling down into.

Together, Quebec, Gatineau, and Ottawa form the National Capital Region (NCR) in Canada.

Ottawa is regarded as a technological and political centre of Canada. A youthful and vibrant city, Ottawa has much to offer to the immigrants that settle in the city.

Generally, when they move to Canada, economic immigrants tend to prefer settling down in prominent cities like Toronto, Montreal, or Vancouver.

As per statistics by the government of Canada, in 2017, about 66% of the economic immigrants to Canada settled in Ontario, Quebec, and British Columbia. 34%, on the other hand, settled in the rest of Canada.

While the Provincial Nominee Program (PNP) has led to many immigrants coming to the participating provinces and territories, the failure to retain the immigrants in the provinces/territories is a recurrent issue. Often, migrants that come to Canada through PNP soon move to other metropolitan cities instead.

While the charm of popular destinations like Toronto or Montreal is expected to continue unabated, there are various other places in Canada worth living in.

Unless you explore your options, you will never know what all you can avail.